The use of the C-band for 5G has raised concerns in the aviation industry regarding possible interference with aircraft radio altimeters.

Radio altimeters are designed to generate data for other safety equipment on the plane, including navigation instruments, terrain awareness, and collision-avoidance systems. These sensitive avionic devices could be susceptible to RF interference, creating concern that they might provide wrong readings or not function at all.

The effects of interference are diverse, ranging from 5G Multi-Carrier Operations to Open Fronthaul and Cybersecurity Concerns.

One thing is certain: aviation safety cannot be compromised, and all risk should be diligently minimized.

To minimize risk, potential effects of interference can be detected and mitigated through testing and adjusting 5G networks’ influence on RADALT systems prior to live deployment.

VIAVI offers a comprehensive testbed for verification, monitoring, and optimization of both 5G RF and Avionics systems, based on its history of testing both wireless and avionics equipment for communication service providers, airlines, military branches, and equipment manufacturers worldwide.

C-band is a designation by the IEEE (Institute of Electrical and Electronics Engineers) for the portion of the electromagnetic spectrum used for satellite communications, terrestrial microwave radio, and other industrial applications.

C-band frequency range is a component of the larger 3.3 - 4.2 GHz mid-band spectrum, where the frequencies repurposed specifically for 5G wireless range from 3.7 GHz   – 3.98 GHz.

C-Band is a popular term mostly used in the United States. Other countries, among which many European ones, have been using the lower part of the mid-band range for 5G channels in their early commercial rollouts, while the US has recently started adopting the higher part, which is the actual C-band (3.7 GHz to 3.98 GHz).

C-band is an excellent spectrum for 5G, because it provides an outstanding balance between bandwidth and coverage, with the throughput needed to enable 5G specific use cases like enhanced mobile broadband (eMBB).

In respect to potential interference between 5G radio frequencies and radar altimeters, it would occur in a very narrow band of radio frequency, one that is technically not even part of the C-band being utilized by communication service providers. Nevertheless, there is potential for interference from the edges of these bands. 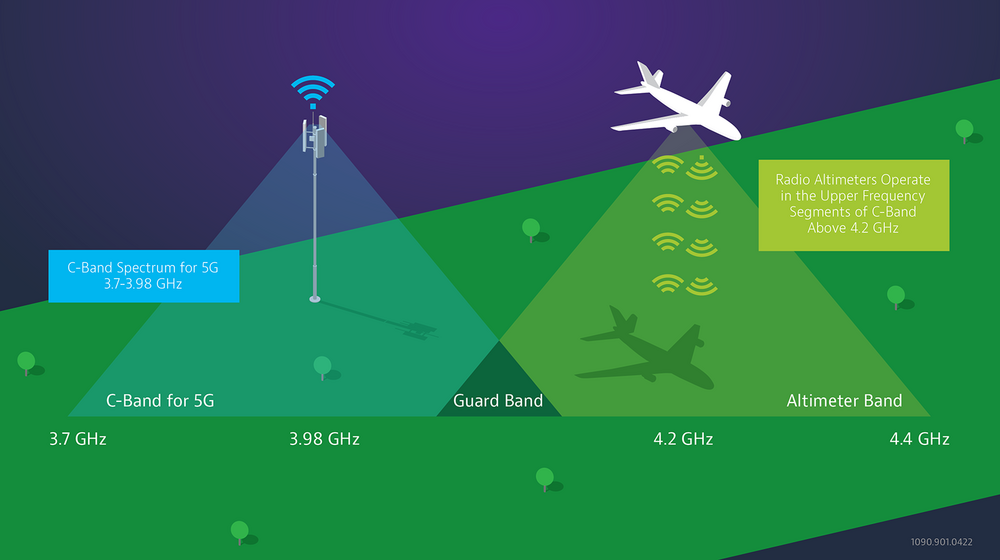 What is a Radio Altimeter

Radio Altimeter (RADALT) – sometimes called radar altimeter– uses radio waves to measure an aircraft’s altitude above the terrain. The above ground level (AGL) altitude of the aircraft is measured by transmitting a radio frequency (RF) energy beam down to the ground and receiving a portion of this energy back through reflection from the terrain or other obstacles. In addition to providing ongoing altitude data to the cockpit, an aircraft radio altimeter is requisite for instrument landings, ground proximity warning systems (GPWS), and the low-altitude, low-visibility flight operations that are instrumental to military aviation. Radio Altimeters operate in the 4.2-4.4 GHz band.

The U.S. Federal Aviation Administration (FAA) has warned that the new 5G technology could interfere with instruments such as radio altimeters. Aircraft altimeters operate in frequencies of 4.2-4.4 GHz, and 5G networks use frequencies in the 3.7-3.98 GHz range.

Why is this now a big concern, since the spectrum below 3.98 GHz was already used by point-to-point and satellite-based services with no impact on RADALTs?

The difference today is in the number and density of the transmitting stations. 5G transmitters using C-Band spectrum are being deployed in more base stations and in larger numbers of user equipment, both on the ground and in or around air traffic control surfaces. The higher density of these base stations and user equipment, plus their effective radiated power and potential proximity to aircraft, increase the risk of interference with an aircraft’s RADALT.

Addressing the noise between 5G and Airline Operations

Aviation safety cannot be compromised. Industry players must separate theory from reality in terms of risks, especially when it comes to the complex and dynamic nature of 5G. Testing and adjusting 5G networks’ influence on RADALT systems before live deployment can help detect and mitigate potential interference. 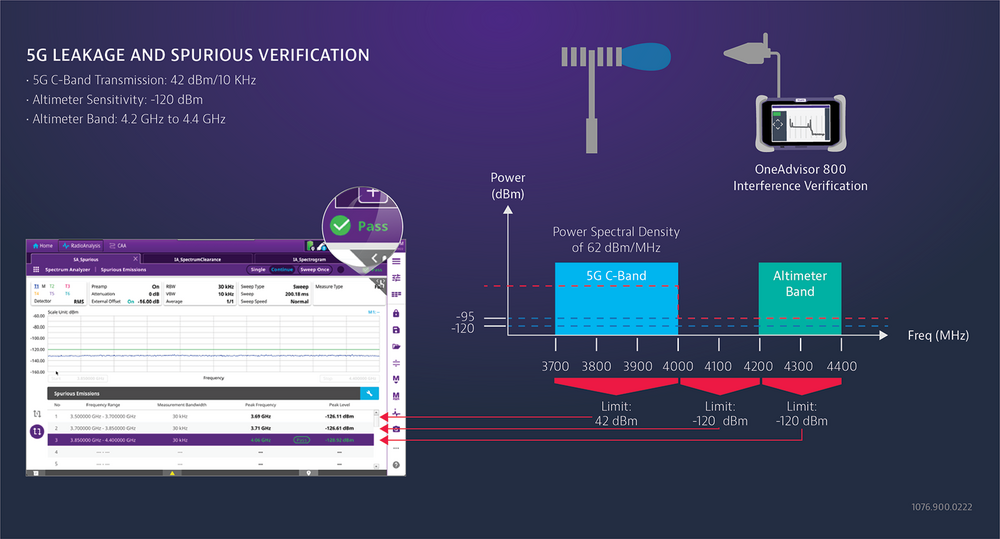 Example of 5G leakage and spurious verification with the OneAdvisor 800

VIAVI Testbed for Airlines and 5G

VIAVI has established a testbed consisting of: 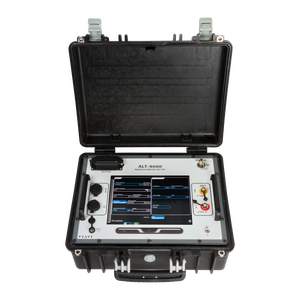 The VIAVI ALT-9000: provides altitude simulations with true RF time delay and path loss models to test any type of RADALT system, including Low Probability of Intercept (LPI), Combined Altitude Radar Altimeter (CARA) & Next Generation variants. The ALT-9000 is instrumental in enabling rigorous test procedures and workflows to assess, evaluate, and monitor the RADALT vulnerability to any potential 5G interference.

The VIAVI OneAdvisor 800: with real-time spectrum analysis for the 5G C-band range of frequency with 2D and 3D spectrogram plot, the OneAdvisor 800 monitors and detects channel leakage and frequency bleeding, as well as spurious emissions that potentially can impact RADALT operations.

The VIAVI Ranger: for broadband recording and playback of RF signal environments. The Ranger records real-world 5G signals and plays them back into RADALT devices during testing to simulate 5G C-band interference. When used with the ALT-9000 and OneAdvisor 800, the Ranger enables advanced testing under real-world conditions.