Combines A/E/J functionality on the same platform with support for the latest PCIe, NVMe and CXL specifications, and simultaneous multi-user Analyzer capability
Parcourir

What is Compute Express Link?

CXL is a cache-coherent open interconnect standard for high-speed CPU connection to memory and other devices. Compute Express Link leverages the standard PCIe 5.0 physical layer and runs as a supported alternate protocol. By creating a common memory space for connected devices, the CXL standard brings performance advantages for hyperscalers and other advanced applications. 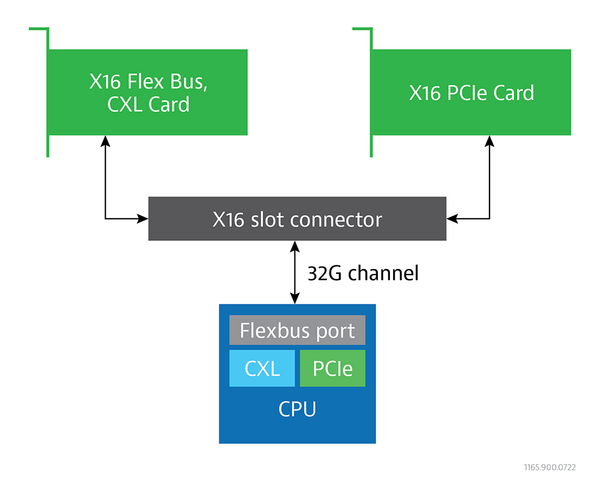 How Does CXL Work?

In summary, the Compute Express Link framework establishes coherency between the memory of the CPU and each connected device. This allows storage resources to be pooled and shared efficiently even as the software stack complexity is reduced. To enable memory pooling, both the host and peripheral device(s) must be CXL-enabled. Data transfer is completed using 528-bit flow control units or “flits”.

As the interface has evolved, unique use cases and applications have led the CXL Consortium to define three discrete device types.

The release of the CXL 1.0 standard in 2019 was a significant milestone marked by CPU access to shared accelerator device memory. Compute express link protocols and standards have continued to improve and expand since this successful debut.

Impact of CXL on Storage

This shift in storage dynamics will also increase the size of cached memory pools, helping to meet the temporary storage needs of hyperscale data centers and other large computing enterprises. The additional capacity created through CXL memory pooling can be called upon as needed for high-volume workloads. This storage paradigm shift is consistent with the overall trend towards data center disaggregation and open architecture.

Rather than acting as a direct rival technology to CXL, Cache Coherent Interconnect for Accelerators (CCIX®) takes an alternate approach to memory pooling.

VIAVI PCIe 5.0 interposers like the Xgig PCIe 5.0 16-lane CEM Interposer can be used to capture CXL traffic running on a PCIe physical layer. The interposer creates a bi-directional interface between the protocol analyzer and system under test.

VIAVI and The CXL Consortium

The CXL Consortium is an open industry standard group formed to develop technical specifications that facilitate breakthrough performance for emerging usage models while supporting an open ecosystem for data center accelerators and other high-speed enhancements.

The Consortium was formally incorporated by the nine founding organizations in 2019 and now includes approximately 170 member companies. This includes 15 leading computer industry organizations that comprise the board of directors.

The History of Compute Express Link

CXL was first introduced to the world in March of 2019 with the release of the CXL 1.0 specification. Encompassing only minor updates, CXL 1.1 was released just three months later. The significant upgrade represented by version 2.0 in November of 2020 included link switching, link security, and other important features that directly addressed system performance and fast-tracked adoption. Hot-plug flows were also defined to add or remove resources reliably for applications like CXL over Ethernet.