Distributed Access Architecture (DAA) is a method used to decentralize cable networks by relocating select functions that have typically resided in the headend or hub to intelligent fiber nodes, closer to the subscriber. Moving these operations away from the hub helps to relieve the space, hardware, and cooling constraints of the headend as node counts and traffic continue to grow exponentially. A 10Gb Ethernet fiber link is used to connect the remaining components to the intelligent node, replacing the previous analog optical link.

As distributed access architecture has taken shape, variations have evolved that strategically shift layers of network functionality downstream. Remote physical layer architecture (R-PHY) moves the modulation and demodulation to the fiber node and leaves other functionality at the hub or headend. Remote PHY has been the most widely adopted DAA architecture to date due to the mature CableLabs specifications and wide variety of available equipment.

Remote MAC-PHY, or R-MACPHY, relocates both the PHY layer and processing MAC layer to the node. This option leaves only servers, switches, and routers at the headend or potentially enables their migration into datacenters. The PTP timing issues caused by the separation of the PHY and MAC layers are eliminated with R-MACPHY, since their network functionality is once again integrated. 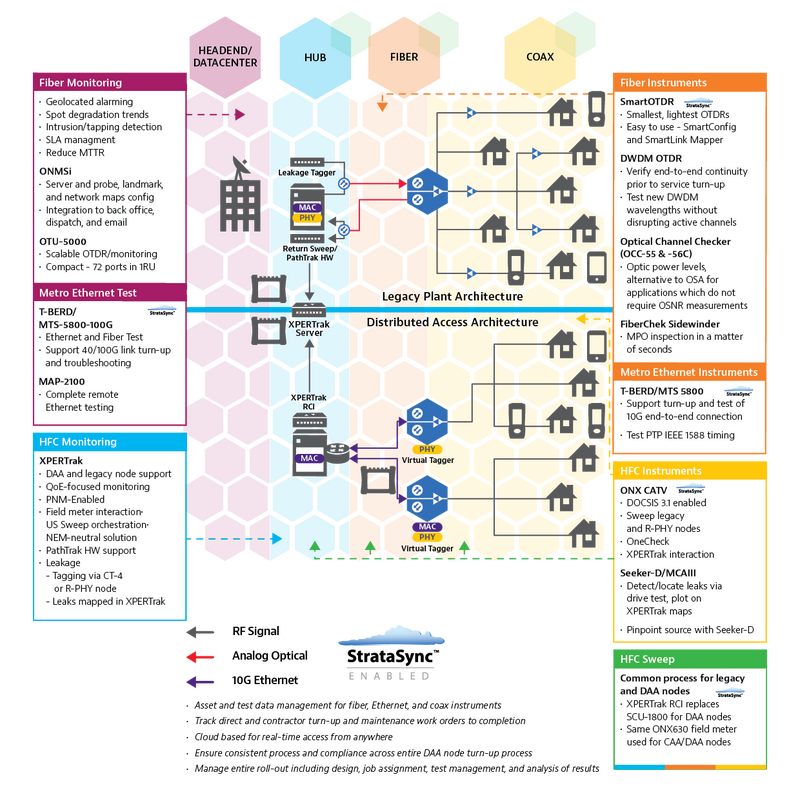 Distributed CCAP is a subset of distributed access architecture that is based on the converged cable access platform introduced in 2011. CCAP technology was originally designed to upgrade and replace the cable modem termination systems (CMTS) at the headend by unifying all switching, routing, and QAM functions and transmitting data and video from the same device.

With the migration to CCAP, all channels became digital and all traffic became IP based. This eliminated the need for combiner functionality at the headend. Replacing the CMTS with CCAP produced incremental efficiencies with decreased energy consumption and improved overall QoS, but no substantial space savings were evident since the physical equipment size did not significantly change.

CCAP took a sizable leap forward through the implementation of distributed CCAP architecture, where the PHY layer, DOCSIS MAC layer, or both can be migrated to the intelligent node. Flexible MAC Architecture (FMA) furthers this progression with a strategy for disaggregation that supports flexible positioning of MAC functionality either within or outside the headend. FMA allows distributed CCAP architecture to be broken up in a logical fashion, incorporating enhanced virtualization and boosting interoperability. The FMA library of specifications was published by CableLabs in September of 2020.

The migration to distributed access architecture provides a case in point for measured and far-sighted approaches to deployment as the sands of technology shift. A staged deployment can be the most cost effective, since OPEX logistics become more complex as network functionality migrates from the headend to the nodes.

DAA architecture based on IP also introduces a new set of technician skills and processes that differs from traditional RF technology. This highlights the importance of advanced, architecture-neutral DAA test solutions with intuitive interfaces and workflows designed to seamlessly bridge the gap between legacy architecture and DAA networks.

DAA deployment hurdles include the assessment of jitter and timing for R-PHY deployments and the complete re-verification of all planned and existing services to be delivered over the new platform. Repurposing any legacy analog fiber for high-speed Ethernet also requires a thorough assessment of the fiber dispersion than can lead to10G Ethernet performance degradation.

The most obvious initial benefits of distributed access architecture are the space, power, and HVAC resource reductions at the headend (hub) location. This becomes increasingly valuable as subscriber rates and bandwidths multiply and improvements in traditional headend equipment efficiency and density struggle to keep up.

With the scope of headend operations reduced, the equipment can be consolidated with more service groups potentially originating from the same physical space. This helps set the stage for gigabit-plus broadband by producing a standards-based, scalable architecture that aligns with the FTTx build-out model. DAA deployment also provides a platform for cable operators to continually integrate virtualization elements into their networks, making net gains in efficiency and service velocity possible.

As with any significant advancement, distributed access architecture also creates inherent challenges that must be overcome. The crowded headend of centralized access architecture (CAA) still provides some advantages in maintenance logistics, since equipment and connections are centrally located. DAA disperses service and troubleshooting to include any remote or potentially “environmentally challenging” locations of the fiber nodes. These node locations can also be subject to vandalism or other unexpected damage.

Distributed access architecture also introduces interoperability issues, as vendors rapidly develop and deploy their own proprietary equipment. These interoperability challenges, along with synchronization, leakage, and noise testing, are further complicated by the physical separation of network functionality. Although some of these challenges can be mitigated through R-MACPHY architecture, many cable operators prefer to wait for R-MACPHY specifications and solutions to mature.

By creating an efficient method that provides more symmetric bandwidth for data hungry customers, DAA has become an enabling technology for cable network expansion. The potential challenges of DAA are vastly outweighed by the benefits, although innovative modes of planning, testing, and interoperability are essential for continued success.

The process of driving digital fiber optic technology closer to the customer to improve efficiency and performance is known as fiber deep. The type of fiber deep deployment known as Node+0 is the most extreme form, with the optical fiber extending all the way from the headend to the last-mile fiber node providing service to the end user, and all amplifiers removed from the lines except for those in the nodes themselves.

Very few cable industry operators have significant plans for node+0 today, as most are reducing amplifier cascades down to node+3 with plans to evaluate the economics of n+0 vs fiber to the home (FTTH) in the future. N+0 is currently a prerequisite to future deployment of Full-Duplex DOCSIS (FDX), enabling broad flexibility in utilization of spectrum for upstream vs downstream bandwidth addressing the push for near-symmetrical services.  Fiber deep in concert with distributed access architecture produces another viable alternative to FTTH with a less extensive overhaul of existing infrastructure required. The potent combination of  DOCSIS, DAA, and fiber deep have empowered the existing hybrid fiber-coaxial (HFC) infrastructure to offer gigabit services and keep pace with speed and bandwidth demands.

In addition to meeting the current and future broadband capacity demands, fiber deep is also considered a pivotal element of successful 5G implementation. The network densification and manifold increase in wireless traffic accompanying 5G cannot be supported without a monumental increase in deep fiber infrastructure. In this way, DAA can become a complimentary platform for 5G wireless expansion.

Despite the numerous advantages of distributed access architecture, many in the cable industry have taken a measured approach to adoption. The sunken investment in existing centralized access architecture (CAA) infrastructure can influence transition planning from the ROI or cost perspectives. Some networks simply are not large enough or growing fast enough to justify the additional CAPEX. For other cable operators, hubs overloaded with CCAP equipment still cannot meet the demand, and the burden on headend architecture is an insurmountable bottleneck.

Aside from the investment considerations, security is another potential advantage of CAA, since a central headend location can be securely locked, and access can be closely monitored to prevent equipment or data theft and sabotage. Maintenance and service responsibilities associated with DAA can also be an influential factor, since the distributed access architecture approach potentially requires travelling to a wide geographic area for recovery tasks that could once be performed in a controlled, central location.

Downsizing and integration of electronics go a long way towards addressing bandwidth and expansion concerns, but the pressures on headend capacity accelerated so quickly that a complete paradigm shift in the cable industry was necessary. Distributed access architecture, distributed CCAP architecture, flexible MAC, and fiber deep not only remove the bottleneck by shifting essential functionality downstream, they also improve QoS and introduce scalability factors to future proof this architecture as the demand inevitably grows. 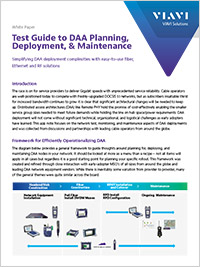 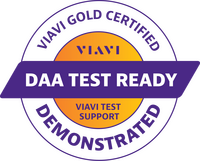