What Is a Protocol Analyzer?

A protocol analyzer is a tool used to monitor and interpret data transferred over a communication channel. Using a combination of hardware and software, captured data packets from a computer bus or network are converted into meaningful protocol decodes. Protocol analyzers are invaluable tools for continuous data monitoring as well as post capture analysis.

To standardize common data transmission processes, organizations like PCI-SIG and IEEEE have established communication protocols to specify industry-wide software and hardware conventions. By comparing captured data behavior to established standards, conformance of traffic to protocols can be evaluated and logical errors can be detected and diagnosed.

An advanced protocol analyzer can be applied effectively to data transmission channels ranging from a local computer bus to large-scale datacenter installations. Customers supported by VIAVI protocol analyzer offerings reflect the breadth of the computer technology ecosystem. This includes a host of Tier 1 organizations in the computing, data storage, networking, and electronics industries.

Components like switches, motherboards, and storage devices benefit from protocol analysis as they progress from R&D to the field. These components eventually form the backbone of wired and wireless networks and data center deployments around the world. Embedded system designers utilize protocol analyzers to test and troubleshoot the data transfer between microcontrollers and peripherals in embedded circuitry. 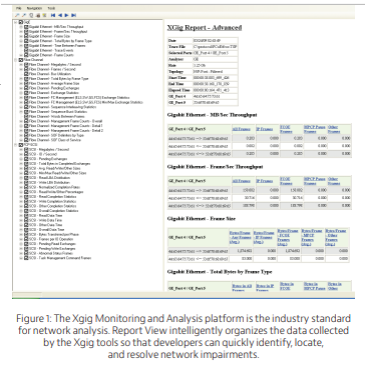 What Does a Protocol Analyzer Do?

In general terms, a protocol analyzer captures traffic data streams (traces) and performs analysis on their characteristics. A detailed review of inline traffic leads to actionable metrics and reports in easily understood and accessible formats. With the diversity of communication protocols now deployed, another key function of the protocol analyzer is to assess the decoded data streams for conformance to their respective standards.

What Do Protocol Analyzers Test and Measure?

Measuring inline traffic behavior leads to the verification of packet integrity and identification of logical errors. The analyzer can also be used to assess and quantify communication delays and response times (time-outs). Any protocol violations can be immediately captured and highlighted during testing. The wealth of data captured by a network protocol analyzer also provides deep insight into link utilization. This timely reporting helps to accelerate troubleshooting activities.

Some VIAVI Analyzers can be bifurcated as illustrated in the diagram below.  In this example, a 16-lane Xgig PCIe5 Analyzer is split into two or four independent ports enabling dual port testing or multiple links with simultaneous tests on the same chassis. 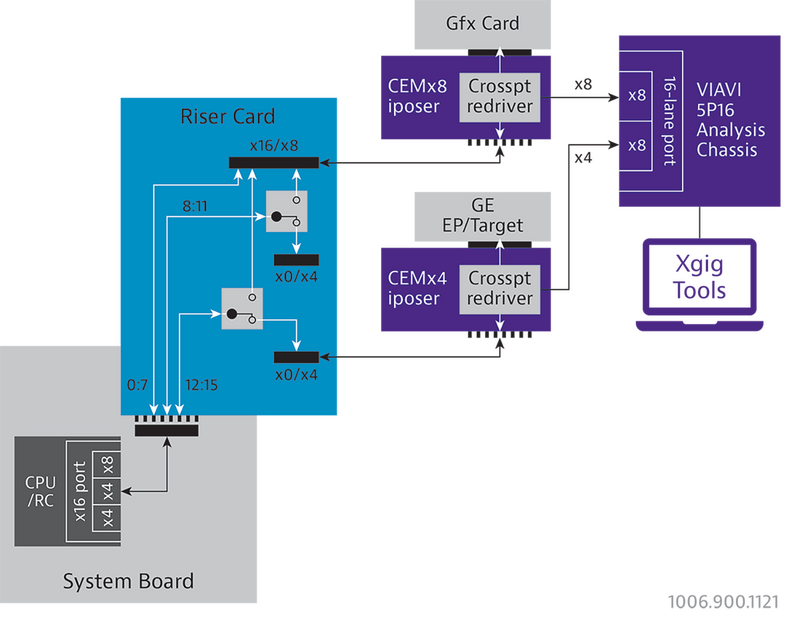 The test and measurement capabilities of a wireless network protocol analyzer are as diverse as the applications, protocols, and communication channels it can be applied to. Along with automated traffic capture, error analysis, and error injection (jamming) capabilities, the best network protocol analyzers incorporate features like cross-domain analysis and traffic correlation across multiple protocols.

Other capabilities are specific to the technology or standard being tested. For example, a PCIe or NVMe protocol analyzer might include dynamic queue updates, integrated trace views, and simultaneous multi-lane analysis.

Today’s storage servers are being designed with 8 12, 24 or more U.2, U.3 or EDSFF NVMe drive bays which often have a tree of PCIe packet switches for expansion.  Below is an example of port expansion with a PCIe switch.  The bifurcated analyzer is used to evaluate the 4-links operating in parallel. 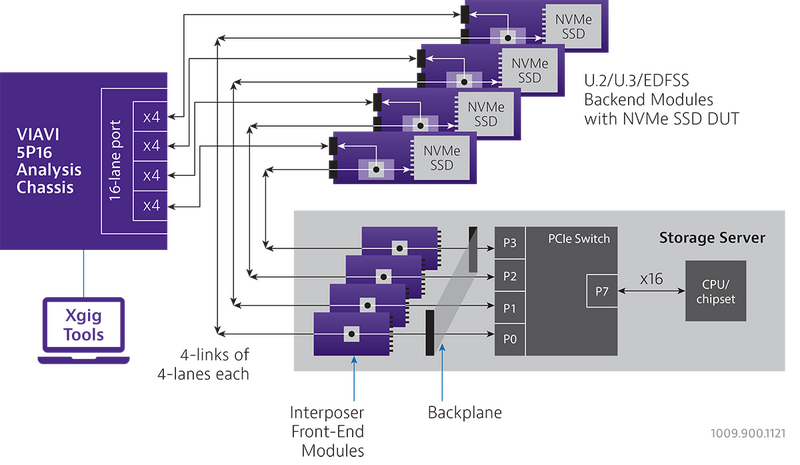 All protocol analyzers provide trace capture and protocol debug capabilities.  VIAVI provides two types of protocol analyzers, one used in the development of motherboards (inside the server such as PCIe, NVMe, CXL, SAS/SATA, SCSI) and the other used for network analysis and debug (on the wire such as Fibre Channel and Ethernet architectures.

Today, PCI Express is in its 5th generation while generation 6 specification is currently under development and will soon be released to developers. Link speed doubles with each generation shift creating unique PCIe protocol analysis challenges VIAVI has overcome these complexities with an industry leading line of versatile, software-driven PCIe protocol analysis tools. Our PCIe5 platform capabilities include Analyzer, Jammer, Exerciser as well as Link Bifurcation and Simultaneous Multi-User functionality. Xgig software tools, like Expert and Serialytics, support advanced diagnostics, and spec violation/error detection. 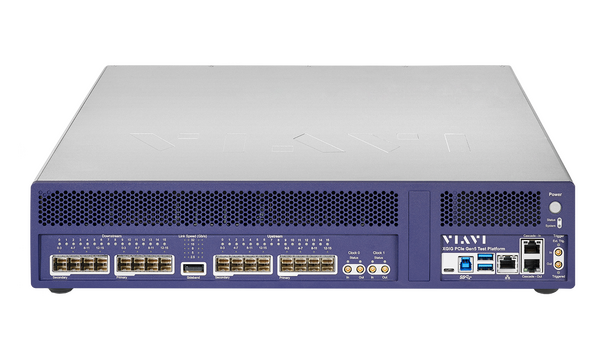 Superior memory, high storage capacity, and alternate protocol support are some of the advanced test features available on the Xgig 5P8 and 5P16 protocol systems.

The SAS and SATA protocols define the data transfer between high volume storage devices and their host systems. The SAS protocol for directly attached devices like hard drives emerged from the parallel SCSI bus technology of the 1980s. At the same time, the SATA protocol evolved from the parallel interface ATA (PATA) standard. These interfaces have gained widespread industry acceptance, leading to dedicated SAS/SATA protocol analyzers for product development and troubleshooting.

Gigabit Ethernet (GE) is capable of transmitting network data at an astounding clip of 1 gigabit per second and has become a key enabler for high throughput network links. To operate effectively, all components of the gigabit ethernet network must conform to established IEEE protocols. Fibre Channel (FC) is an additional high-speed data transfer protocol used for storage area networks (SAN) and data transfer between commercial data centers. 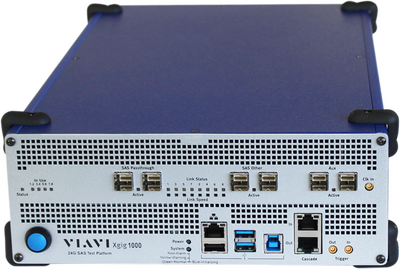 What Happens If You Don’t Use a Protocol Analyzer?

Protocol analyzer software output in the form of actionable graphs, reports, and recommendations is made possible through detailed packet capture and direct visibility into inline traffic. Alternatives to protocol analyzer technology cannot provide the same insight into traffic type, errors, and overall protocol conformance. In the absence of this valuable tool, traffic can only be assessed through indirect measurement or endpoint performance review.

Traditional test tools like oscilloscopes remain useful for many types of electrical testing but can provide only a time-consuming and inconvenient alternative to a protocol analyzer. With the wide variety of components and interfaces now requiring analysis in the lab and field, this added efficiency can translate to accelerated time to market and millions of dollars saved in engineering resources. A portable protocol analyzer is the only logical choice providing controllable test conditions and unwavering confidence in protocol conformance.

How is VIAVI Advancing the Protocol Analyzer Market?

Advanced post-capture features have placed VIAVI protocol analyzers in a category of their own. By automatically computing thousands of protocol metrics and statistics, data can be systematically interpreted, sparing users from time-consuming manual calculations and trace review. Expert software converts captured data into user-friendly graphs and tables without requiring expert level knowledge.

PCIe, NVMe, CXL and Gigabit Ethernet are just a few of the leading technologies demanding higher throughput, lower overhead, and reduced error rates over increasingly complex protocols. Through a dedication to technology and unwavering customer support, VIAVI is positioned to lead the thriving protocol analyzer market for decades to come.

Some VIAVI analyzers also support port Bifurcation and Simultaneous Multi-User capabilities. Bifurcation divides a port that is normally one link into multiple independent links enabling users to capture from these separate links simultaneously. It is a feature VIAVI has successfully implemented in other equipment, like Ethernet and SAS/SATA, and now incorporates into its latest PCIe5 Analysis platform.

To provide developers with additional options and flexibility, VIAVI incorporated Simultaneous Multi-User capability into its Xgig gen-5 platform chassis, including the 5P16 and 5P8, enabled with a bifurcation software license. This feature allows multiple users to perform independent tests simultaneously on the same analyzer chassis from anywhere in the world via a network link. This platform versatility helps streamline tool utilizations, increases equipment productivity, and may reduce the amount of overall hardware necessary to order, manage and support.