Full Study Results Point to Acceleration in Bandwidth Requirements and Adoption of Emerging Technologies, Including 100 GbE and Public Cloud

Milpitas, Calif., May 17, 2016 – VIAVI Solutions (NASDAQ: VIAV) released the results of its ninth annual State of the Network global study today. Based on insight gathered from 740 CIOs, IT directors, and network engineers around the world, enterprises have significantly accelerated their adoption of next-generation infrastructure technologies, driven by skyrocketing bandwidth requirements. Fifty-four percent of respondents expect bandwidth requirements to grow by half in 2016, and 48 percent expect them to double by the end of 2017. Enterprises are significantly increasing deployment of 100 Gigabit Ethernet (100 GbE), public and private cloud, and software-defined networking (SDN). The study is now available for download.

“Data networks of all types, around the globe, are being strained by an explosion of traffic, from bandwidth-hungry video today to the Internet of Things tomorrow,” said Oleg Khaykin, President and Chief Executive Officer, VIAVI Solutions. “As our State of the Network study shows, IT teams are responding by moving faster to implement emerging technologies, giving them the cost-effective scalability and flexibility they need. Of course there will be ensuing challenges, from the unique installation and maintenance requirements of 100 GbE, to the loss of performance monitoring capabilities for networks spread across physical, virtual and cloud segments.” 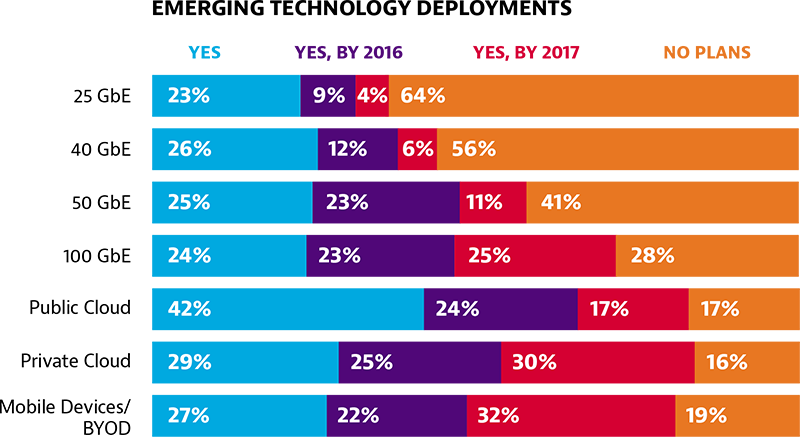 The full results of the survey also show that emerging network technologies have gained greater adoption over the past year.

“The rush towards software-controlled networks, the push for ever-greater bandwidth and the challenges with cloud infrastructure are all part of the ‘megatrends’ that we're seeing in the enterprise market,” commented Shamus McGillicuddy, Senior Analyst at Enterprise Management Associates. “The network is being held to a higher level of availability and performance than ever before. At the same time, hybrid cloud networking is becoming the new normal. That represents a dual challenge to enterprises, as they need to re-tool for a new hybrid environment while finding a better way to analyze performance and manage their resources.”

State of the Network Global Study Methodology
VIAVI (previously Network Instruments) has conducted its State of the Network global study for nine consecutive years, drawing insight about network trends and painting a picture of the challenges faced by IT teams. Questions were designed based on interviews with network professionals as well as IT analysts. Results were compiled from the insights of 740 respondents—more than double the number of the previous study—including CIOs, IT directors and network engineers from around the world. In addition to geographic diversity, the study’s sample was evenly distributed among networks and business verticals of different sizes. Responses were collected from March 10 to March 28, 2016 via online surveys.

About VIAVI Solutions
VIAVI (NASDAQ: VIAV) software and hardware platforms and instruments deliver end-to-end visibility across physical, virtual and hybrid networks. Precise intelligence and actionable insight from across the network ecosystem optimizes the service experience for increased customer loyalty, greater profitability and quicker transitions to next-generation technologies. VIAVI is also a leader in anti-counterfeiting solutions for currency authentication and high-value optical components and instruments for diverse government and commercial applications.  Learn more at www.viavisolutions.com and follow us on VIAVI Perspectives, LinkedIn, Twitter, YouTube and Facebook.