In transportation terminology, backhaul describes a vehicle returning to its point of origin, carrying a new payload acquired at the outbound location. The utility of this concept is equally evident for mobile backhaul networks, the workhorse of modern telecommunications. 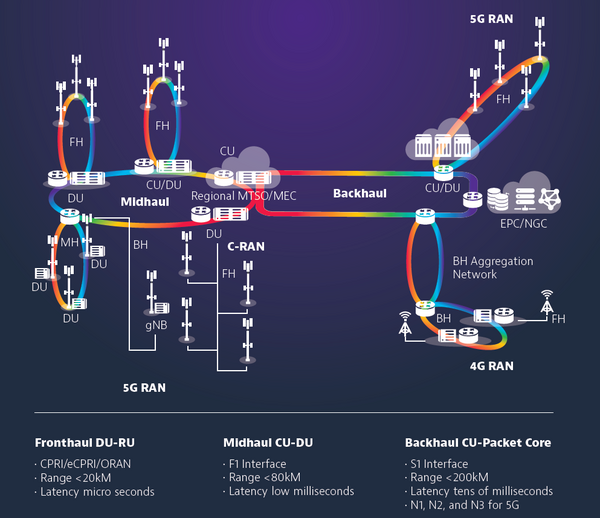 What is Wireless Backhaul?

Backhaul is a general term describing the transport infrastructure used to connect the radio access network (RAN) and the core of a mobile network. This vital link between cell tower location and provider hub is a central component of wireless network infrastructure.

The development of MIMO technology, RAN virtualization, and split architectural models have given rise to the fronthaul and midhaul, which augment the traditional backhaul definition. Combined backhaul, fronthaul, and midhaul architecture are also known as x-haul, with the backhaul component distinguished by its connecting link to the core.

Why are Backhaul Networks Important?

The importance of a backhaul network is sometimes understated, as 5G RAN innovation and new portable device offerings are unveiled to optimize the 5G opportunities. Backhaul performance, capacity, and reliability are integral to meeting the transport demands brought on by 5G connectivity, the Internet of Things (IoT), and the continual uptick in subscribers. Packet loss, high latency, and carrier jitter are just a few of the troublesome symptoms to be expected when backhaul readiness has not been addressed.

The Impact of 5G on Backhaul Networks

Each new generation of mobile technology has ratcheted the pressure on backhaul networks, although the current impact of 5G is unlike any previous iteration. Diversity of use cases, MIMO, and network slicing have influenced backhaul for 5G in tangible ways. Network densification and the reduced coverage capacity of the millimeter wave exacerbate the 5G backhaul challenges.

At peak throughput and download speeds of up to 10Gbps, exponentially higher data loads must be “backhauled” from infinitely more locations. Each of the primary 5G use cases, including Enhanced Mobile Broadband (eMBB), massive Machine-Type Communication (mMTC), and ultra-reliable Low-Latency Communications (urLLC), are made possible through network slicing and network function virtualization (NFV) within the fronthaul and midhaul segments.

5G fronthaul and midhaul configuration can be tailored to use case latency, bandwidth, and synchronization requirements. This has lessened the latency burden for 5G backhaul links and shifted the focus to capacity, spectrum efficiency, and service orchestration to dynamically support 5G use case requirements.

Since coaxial cable first connected mobile networks to the core a generation ago, backhaul technology has mirrored the transport media evolution and persistent traffic growth that have defined the telecommunications era. Ongoing adoption of new infrastructure and transmission protocols has kept backhaul networks a step ahead of the demand.

Time Division Multiplexing (TDM) technology originated in the 1980s and established an early backhaul transport mode over coaxial cable. Also known as circuit-switched or point-to-point backhaul, TDM methods divide customer services into discrete time slots. These time allotments are switched through the network to reliably manage the bandwidth and performance demands of each service. Precise timing is required for the TDM backhaul method to function correctly.

As basic services like text and voice have been overshadowed by wireless data delivery through LTE and 5G, the scalability of connection-oriented, circuit-switched transport technologies has diminished. Backhaul deployment has shifted to a packet-based approached that aligns with the overarching mobile network architecture. That said, there are still many regions around the world that still use TDM for backhaul.

Packet-based Ethernet supports backhaul for 5G effectively. Bit rates and link distances have increased through the introduction of fiber-based Ethernet, and bandwidth limitations have been alleviated. Since Ethernet lacks the precise frequency synchronization of TDM backhaul, the precision time protocol (PTP) has been developed by the IEEE to address Ethernet synchronization, including long-distance backhaul links. This fidelity is essential for 5G use cases like driverless cars that rely on precise timing an ultra-low latency level. 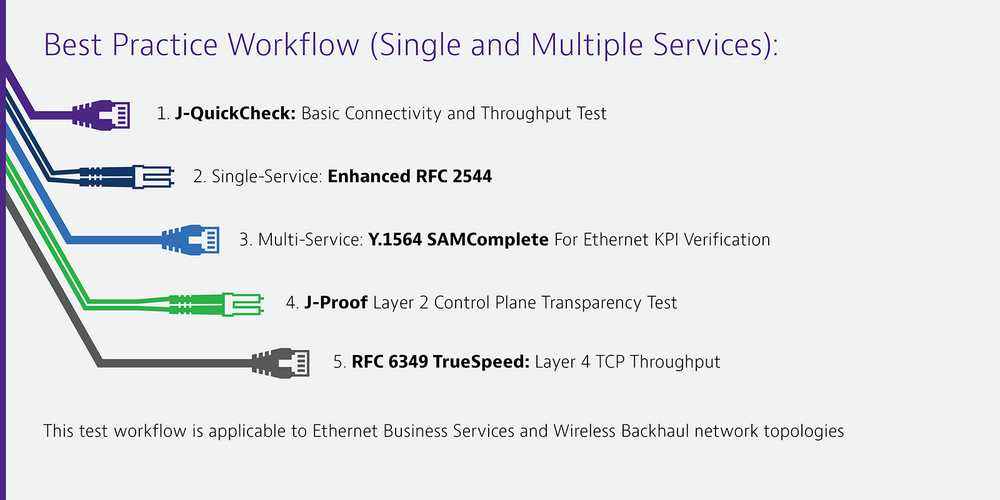 Among the wireless mobile backhaul options, microwave backhaul has emerged as a mainstay technology with its inherently low deployment costs and relative immunity to interference or physical disruption. Leased microwave spectrum can be used to backhaul multiple services over the air with minimal investment. Quadrature Amplitude Modulation (QAM), radio link bonding, and other innovations have been employed to optimize microwave backhaul capacity. With high scalability and efficiency compatible with 5G network requirements, microwave backhaul is an enabling component of 10Gb wireless backhaul. In areas where fiber is not available, microwave backhaul is still widely used.

A Passive Optical Network (PON) refers to a point-to-multipoint fiber network configuration utilizing unpowered fiber, splitters, and combiners. Commonly deployed for fiber to the home (FTTH) and fiber to the building (FTTB) applications, the benefits of PON technology are now being realized for fronthaul and backhaul network applications.

PON networks utilizing a shared fiber model made up of passive components can attain the 10Gbps speed and low latency required for 5G. PON splitting has been recognized as a logical solution for 5G baseband distribution to remote radio heads. PON elements will continue to be incorporated into mobile backhaul networks as the technology improves.

High-frequency deployments associated with 5G are, unfortunately, coverage-limited and expensive. Fiber deployment is a major factor with regard to cost and time. One alternative to the high cost and length of time to install fiber is integrated access backhaul (IAB), where part of the wireless spectrum is used for the backhaul connection of base stations instead of fiber. Although 5G spectrum is also a valuable resource, carriers may be willing to use a portion of it for a short time in exchange for plugging a coverage hole, or extending coverage along a highway, or even for events which are by design temporary, like a concert, sporting event, etc.

What are Common Backhaul Network Problems?

Along with the preexisting mobile backhaul problems, small cell proliferation, throughput demands, and massive traffic challenges brought on by the emergence of 5G continue to raise the bar. While these issues are widely recognized, 5G mobile backhaul solutions vary by operator. Backhaul aggregation at “super cells,” wireless backhaul in the millimeter wave, and an unlimited number of holistic solutions merit consideration.

Why Should You Test Backhaul?

Earlier generations of mobile backhaul technology were designed to support macrocell infrastructure in a predictable manner. As TDM has transitioned to Ethernet/IP and small cells supplant the traditional macrocell model, base station architecture and traffic management strategies have adapted accordingly. These incremental changes have altered mobile backhaul test strategies from a “one and done” verification approach to a philosophy based on continuous performance monitoring.

5G use cases with stringent throughput and latency requirements have removed any margin for error that may have existed in the past. Packet-based Ethernet has streamlined the backhaul data flow, although bit error rates (BER) and packet loss must remain exceptionally low to support data-intensive applications like artificial intelligence (AI) and augmented reality (AR). Backhaul testing and monitoring of performance metrics over time can ward off potential issues quickly and accelerate troubleshooting.

Network Timing and Synchronization
When mobile backhaul networks transitioned to packet-based networks, providing reliable clock synchronization over these networks became a critical requirement. Packet-based synchronization techniques like PTP/IEEE 1588v2 are required to deliver synchronization signals across IP networks to various devices at the network edge. The lack of synchronization at the base station leads to RF interference, which in turn causes degraded call quality, increased dropped calls during handoffs, excessive call setup times, lower bandwidth, and inefficient use of spectrum. Since wireless carriers compete on all these important customer quality issues and pay millions or billions of dollars to acquire spectrum licenses, it is easy to see how tight network synchronization is vital to them.

Steps for Testing a Backhaul Network

As backhaul technology grows increasingly complex and demand accelerates, a comprehensive lifecycle approach to backhaul testing has become more logical and cost-effective. Backhaul performance requirements move rapidly from the drawing board to mobile solutions and designs that must be deployed quickly, safely, and economically.

Definitive service targets are the first step on the path to customer satisfaction. Each new site has a unique mixture of service level agreements (SLAs), coverage goals, and backhaul utilization projections that ultimately drive the backhaul architecture, capacity, and test requirements.

Service activation is an important phase of backhaul testing when the completed cell site provides its first glimpse into actual service levels and performance baselines. Automated test tools streamline backhaul fiber link characterization and Ethernet service turn-up based on RFC 2544 and Y.1564 specifications. Quick diagnosis of throughput, frame loss, and latency issues can accelerate troubleshooting and prevent a backhaul problem from delaying site certification. The VIAVI T-BERD/MTS 5800 is an ideal tool to test backhaul segments as it provides the ability to test multiple network layers and protocol types, as well as timing and synchronization. 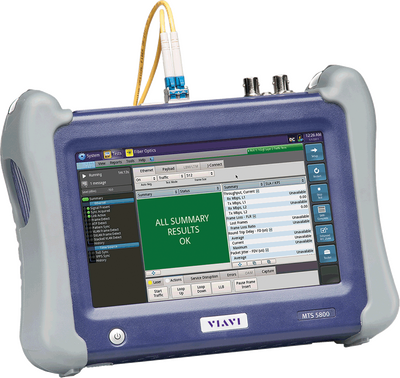 The economic consequences of backhaul degradation can be devastating, so ongoing performance management and key performance indicator (KPI) trending for all backhaul links is no longer a luxury. Automated fiber monitoring solutions, transport assurance options, and a new generation of microprobes work in tandem to immediately detect faults, degradation, or security intrusions and generate alarms. With hybrid backhaul deployments combining the best transmission technologies to meet the standards of 5G, advanced test and monitoring solutions for 10GB wireless backhaul are another essential test element.

The Future of 5G X-Haul

As operators gradually transform their 5G deployments from non-standalone to standalone mode, highly anticipated use cases beyond eMBB will be enabled. The connection of 5G NR to 5G core networks, massive MIMO, network slicing, and millimeter wave transmission unlock the full potential of 5G technology.

As 5G services drive 5G demand, the impact on future x-haul networks will be substantial. A single 5G user in standalone mode consumes up to 10 times the bandwidth of a typical LTE user. To address this challenge proactively, out-of-box thinking will need to complement the simple multiplication of existing ethernet and wireless backhaul links. Open RAN standards are a part of the solution, driving efficiency through interoperability, convergence, and market competition. 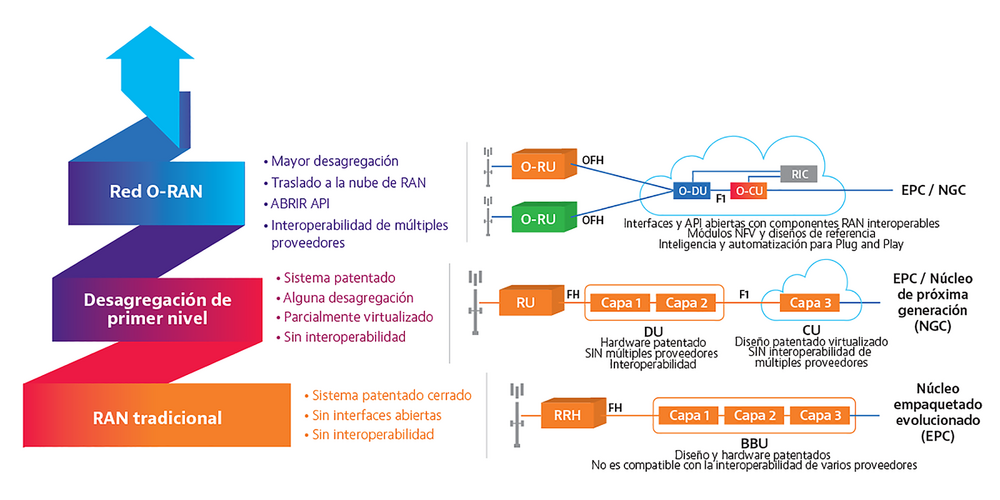 By splitting traditional backhaul technology into configurable fronthaul, midhaul, and backhaul segments, x-haul has produced a solution equal to the task at hand. New innovations like quantum networks could make 5G x-haul technology look a bit like the overloaded trucks backhauling gravel to the quarry a century ago. Effective testing and monitoring for the breadth, flexibility, and lifecycle of mobile backhaul networks will continue to ensure service levels and satisfaction for future generations.

The Importance of Backhaul Performance in Wireless Networks

Learn the new requirements and challenges of current transport technologies, as well as the split options and related service level agreements.