Learn all about passive optical networks including the different types of PON, the various applications, benefits, PON architecture, and much more!

What Is a Passive Optical Network?

A passive optical network (PON) is a fiber-optic network utilizing a point-to-multipoint topology and optical splitters to deliver data from a single transmission point to multiple user endpoints. Passive, in this context, refers to the unpowered condition of the fiber and splitting/combining components.

In contrast to an active optical network, electrical power is only required at the send and receive points, making a PON inherently efficient from an operation cost standpoint. Passive optical networks are used to simultaneously transmit signals in both the upstream and downstream directions to and from the user endpoints. 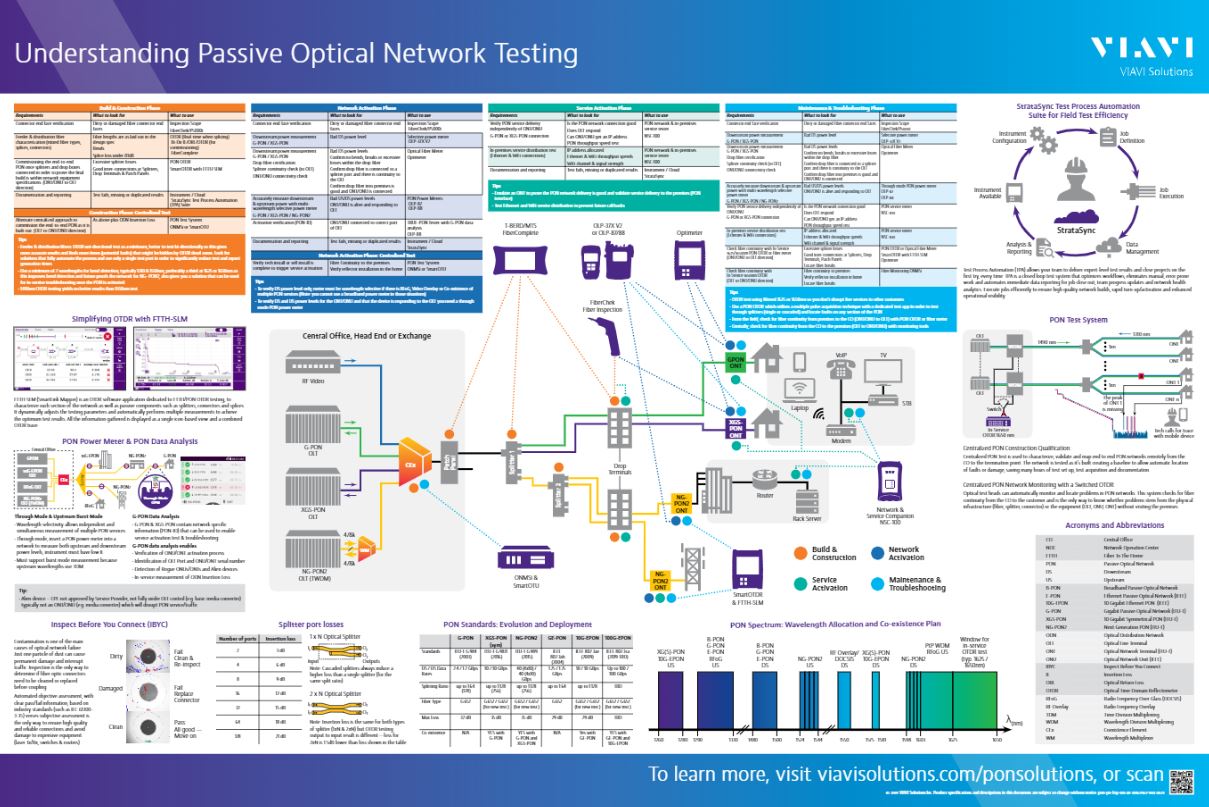 The optical fiber and splitters are the truly “passive” building blocks of the PON, with no electrical powering required. Optical splitters are not wavelength selective and simply divide any optical wavelengths in the downstream direction, of course splitting of an optical signal does incur a power loss which depends on the number of ways a signal is split. Splitters require none of the cooling or other ongoing maintenance inherent to active network components (such as optical amplifiers) and can last for decades if left undisturbed. In addition to the passive components, active end devices are required to fully create the PON network.

The optical line terminal (OLT) is the starting point for the passive optical network. It is connected to a core switch through Ethernet pluggables. The primary function of the OLT is to convert, frame and transmit signals for the PON network and to coordinate the optical network terminal (ONT) multiplexing for the shared upstream transmission. You may also see the end-user devices referred to as optical network unit (ONU), this is simply a difference in terminology between the two main standards bodies, the ITU-T who use ONT and the IEEE who use ONU, the two terms are effectively interchangeable but depend on the PON service and standard being utilized (see below).

The ONT is the powered device of the passive optical network system at the opposite (user) end of the network and includes Ethernet ports for in home device or network connectivity.

Point-to-multipoint was selected as the most viable PON architecture for optical access networks with the inherent efficiencies of fiber sharing and low-power consumption. This architecture was standardized in 1998 via the ATM-PON G.983.1 specification.

Today, the ITU-T G.984 standard for G-PON has supplanted the ATM standard, since Asynchronous Transfer Mode (ATM) is no longer utilized.

A PON network starts with the optical line terminal (OLT) at the service provider source location typically known as a Local or Central Office, or sometimes referred to as an exchange or headend. From there, the fiber-optic feeder cable (or feeder fiber) is routed to a passive splitter, along with a backup fiber if one is used. Distribution fibers then connect from the splitter to a drop terminal, which can be located in a street cabinet or in a ruggedized housing mounted in a pit, on a telegraph pole or even on the side of buildings. Drop fibers then provide the final one-to-one connection from drop terminal port to an end user ONT/ONU. In some cases, more than one splitter is used in series, this is referred to as a cascaded splitter architecture.

The signals carried on the feeder fiber can be split to provide service to as many as 256 users with an ONU or ONT converting the signals and providing users with internet access. The number of ways the downstream OLT signal is divided or split before reaching the end user is known as the splitter or split ratio (e.g 1:32 or 1:64).

In more complex configurations where RF video is being broadcast in parallel to the PON data service or additional PON services are co-existing on the same PON network, passive (MUX) combiners are used at the central/local office to merge the video overlay wavelength and additional PON service wavelengths onto the outbound OLT feeder fiber.

An innovation that is integral to PON operation is wave division multiplexing (WDM), used to separate data streams based on the wavelength (color) of the laser light. One wavelength can be used to transmit downstream data while another is used to carry upstream data. These dedicated wavelengths vary depending on the PON standard in use and can be present simultaneously on the same fiber.

Time division multiple access (TDMA) is another technology used to allocate the upstream bandwidth to each end user for a specific time period, which is managed by the OLT, preventing wavelength/data collisions at the PON splitters or OLT due to multiple ONT/ONU transmitting data upstream at the same time. This is also referred to as burst-mode transmission for the PON upstream.

Since its introduction in the 1990s, PON technology has continued to evolve and multiple iterations of the PON network topology have taken shape. The original passive optical network standards, APON and BPON, have gradually given way to the bandwidth and overall performance benefits of the newer versions.

Gigabit-capable PON, or G-PON, developed by the ITU-T utilizes IP-based protocols and is recognized for outstanding flexibility with respect to traffic types, including “triple-play” applications for voice, internet and television. The generic G-PON encapsulation method is capable of packaging IP, Ethernet, VoIP and many other data types.

G-PON is considered the de facto PON standard in use today, with networks covering distances of between 20 to 40 km, depending on split ratio adopted, over single-mode fiber. Downstream wavelength is configured to 1490 nm with upstream wavelength at 1310 nm, with a downstream speed of 2.4 Gbps and 1.2 Gbps upstream.

An additional passive optical network standard from the IEEE is Ethernet PON, or E-PON, which has been developed for seamless compatibility with Ethernet devices. Based on the IEEE 802.3 standard, E-PON needs no additional encapsulation or conversion protocols to connect to Ethernet-based networks. This applies to both the upstream and downstream data transfer directions.

Conventional E-PON can support symmetrical speeds of up to 1.25 Gbps upstream and downstream. Much like G-PON, E-PON provides a range of between 20 to 40km, again depending on split ratio, and utilizes similar 1310 nm upstream and 1490 nm downstream wavelengths, because of this E-PON and G-PON cannot be deployed on the same PON network.

The more advanced 10G-EPON standard increases speeds to a symmetrical 10 Gbps upstream and downstream, in addition it operates at different wavelengths to E-PON using 1577nm downstream and 1270nm upstream, this enables the same PON to be used for both E-PON and 10G-EPON simultaneously as a mechanism to allow for seamless service upgrade and capacity increases on an existing PON network.

The 10G version of G-PON is known as XG-PON. This new protocol supports speeds of 10 Gbps downstream and 2.5 Gbps upstream. Although the physical fiber and data formatting conventions are identical to the original G-PON, the wavelengths have shifted, much like 10G-EPON, to 1577 nm for downstream and 1270 nm for the upstream. Again, this adjustment enables the same PON network to be used for both G-PON and XG-PON simultaneously. The enhanced version of XG-PON is XGS-PON which utilizes the same wavelengths as XG-PON and provides a symmetrical 10 Gbps both upstream and downstream.

Beyond XG(S) is NG-PON2 which utilizes WDM with multiple 10G wavelengths, both up and downstream, to deliver a symmetrical 40 Gbps service. Again NG-PON2 uses different wavelengths to G-PON and XG/XGS-PON to allow for service co-existence of all three on the same PON network.

As speed demands continue to increase year over year, XG-PON, XGS-PON and NG-PON2 will provide an upgrade path that should prove especially beneficial in large multi-tenant or business client settings and as part of wireless 5G networks.

RF TV signals (analogue or digital) can be broadcast over a PON by being modulated onto a single wavelength of light, typically using a 1550nm wavelength, this is referred to as RF video overlay.

A PON is sometimes referred to as the “last mile” between the provider and user, or the Fiber to the X (FTTX) with “X” signifying the home (FTTH), building (FTTB), premises (FTTP) or other location, depending on where the optical fiber is terminated. Thus far, fiber-to-the home (FTTH) has been the main application for PON.

The reduced cabling infrastructure (no active elements) and flexible media transmission attributes of passive optical networks have made it an ideal fit for home internet, voice and video applications. As PON technology has continued to improve, the potential applications have expanded as well.

The rollout of 5G continues, and PON networks have found a new application with 5G fronthaul. The fronthaul is the connection between the baseband controller and the remote radio head at the cell site.

Due to the bandwidth and latency demands imposed by 5G, utilizing PON networks to complete the fronthaul connections can reduce fiber count and improve efficiency without compromising performance. In much the same way the source signal is split between users for FTTH, signal from the baseband units can be distributed to an array of remote radio heads.

Efficient Use of Power

The advantages inherent to PON deployment are plentiful. The most fundamental of these benefits is the lack of powering required for the access network. With power only required at the source and receive ends of the signal, there are less electrical components in the system, reducing maintenance requirements and less opportunities for powered equipment failures.

Simplified Infrastructure and Ease of Upgrade

Efficient use of Infrastructure

All operators need to get as much as they can from new or existing infrastructure and gain service capacity over an existing network footprint. The various PON standards combined with services such as RF over Glass (RFoG) or RF video overlay can coexist on the same PON to offer multiple services (triple play) and gain more bandwidth over the same fiber.

Copper networks that are being replaced by PON are very vulnerable to electro-magnetic interference and noise. Being optical, PON networks are not susceptible to such interference and preserve signal integrity well over the planned distance. In a PON network, we need mainly care about if the active devices (the ONT, ONU and OLT) are managing timing and signal transmission properly and if the passive components are not causing too much signal loss (optical attenuation). Loss is easy to see, and it is easy to identify the cause on the PON elements, making these networks easy to maintain and troubleshoot.

Troubleshooting can be challenging under some conditions, since test access can be forgotten or ignored when designing a PON and test tools must allow in-service troubleshooting without disrupting service to other end users on the same PON. If test access exists, then test can be performed with a portable or a centralized test solution using out-of-band wavelength such as 1650 nm to avoid any clash with existing PON wavelengths. Where test access is not planned, access must be gained from one or the other endpoint at the OLT or ONT, or a section of the PON must be taken out of service temporarily.

High Vulnerability to Breakdown in the Feeder Line or the OLT

Due to the P2MP architecture, the feeder line and the OLT service multiple end users (potentially up to 256). There is little redundancy and in this case of an accidental fiber cut or a faulty OLT, the service disruption can be extensive.

As PON technology continues to improve, the strategic and economic advantages of PON deployment become more compelling. The challenges being addressed by designers of future generations include improved range capability and higher splitter ratios to reduce cable outlay even further. These improvements, combined with speeds now reaching 10 Gbps and beyond, will help to continue the expansion of passive optical networks into the smart cities, universities, hospitals and corporations that make up the connected world of tomorrow. 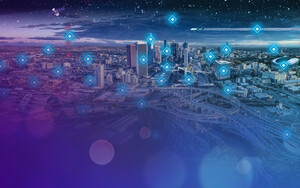