Full suite of testing tools for C-band (Mid-band) deployment in any part of the network lifecycle.

What Is the Meaning of C-band?

The communications or “C” band of the radio spectrum was originally designated by the IEEE for satellite communications, terrestrial microwave radio, and other industrial applications. C-band frequencies repurposed for 5G wireless range from 3.7 – 3.98 GHz. C-band provides an outstanding balance between bandwidth and coverage, with the throughput needed to enable 5G use cases like enhanced mobile broadband (eMBB).

Industry regulators continue to avail significant portions of C-band spectrum to wireless providers. 280MHz of spectrum was made available in the U.S. through an FCC C-band auction held in 2020. Operators paid over $80 billion in total to fortify 5G service in over 100 Partial Economic Area (PEA) markets. Satellite operators have now been tasked with relocating to a frequency range just above 4GHz. 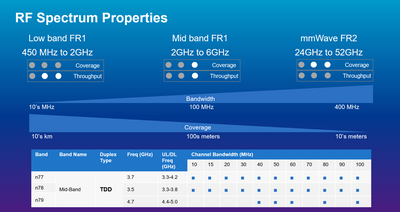 What is The Difference Between C-band and Mid-band?

The terms C-band and “Mid-band” are often used interchangeably. It is more accurate to describe the C-band frequency range as a component of the larger 3.3 - 4.2 GHz mid-band spectrum. Mid-band resides within frequency range 1 (FR1), located squarely between low-band FR1 and the “millimeter wave” (FR2) RF spectrum. The term “C-band” is commonly referred to throughout North America, whereas “Mid-band” is more common in other parts of the world.

3GPP release 15 defines three distinct bands in this range: n77, n78, and n79, for mid-band 5G operation with potential channel bandwidth up to 100 MHz. In addition to offering gigabit throughput over the air, the range of mid-band is also sufficient to minimize cell tower installations.

What is C-band Used for and Why Does It Matter?

Given the optimal balance between coverage and bandwidth, C-band is sometimes referred to as the “waterfront property” of RF spectrum. This potential has been harnessed by past, present, and future occupants of the C-band frequency range.

Get in touch with a C-band solution expert today!

The Role of C-band in 5G
Learn More

The Role of C-BAND in 5G (Summary)
Read Blog