You are here
Knowledge Base - How To

How to remove the battery from the ONX CATV

Submitted by ryan.grace on November 13, 2022 - 12:36am
Overview:
This How-To document covers how to remove the battery from the ONX CATV
Solution Steps:
Make sure that the unit does not have any cover case on Locate the 6 flat-head screws marked with the battery icon. Loosen each screw with a standard slotted screwdriver until you feel them disengage from the Mainframe portion of the unit. Note that these 6 screws are designed to remain captive with the Module. You will not be able to completely remove the screws out from the Module. 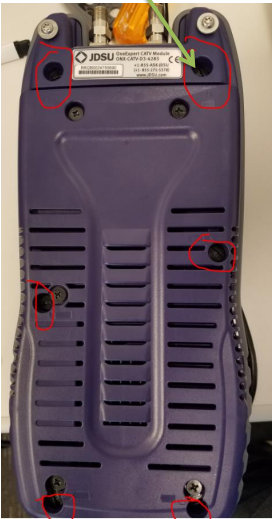 Optional Step. Note it is critical that this step only be performed if needed and only where specifically instructed. There is risk of damaging the water seal of the unit if these instructions are not followed. Gently insert a screwdriver as shown and use it to very carefully pry the two halves of the unit apart. Only do this until the Module begins to release from the Mainframe. Once the Module begins to release, go back to Step 3 to fully remove the Module

Once the “module” has been removed, then remove the screw on top of the battery cover.

Once the battery cover has been removed, remove battery from unit. 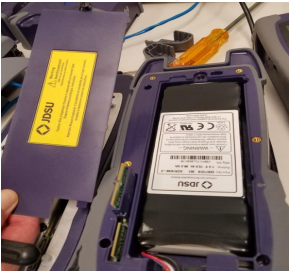