Over 300 Million People Across 49 Countries Now Have Gigabit Internet Availability, According to VIAVI’s Gigabit Monitor

San Jose, Calif., August 1, 2018 – Gigabit internet is now available to 301 million people across 49 countries, according to the latest data in the Gigabit Monitor from VIAVI Solutions (NASDAQ: VIAV). The volume of gigabit internet deployments has increased by 38 percent since May 2017. This means that 4.2 percent of the global population now has gigabit internet available to them. 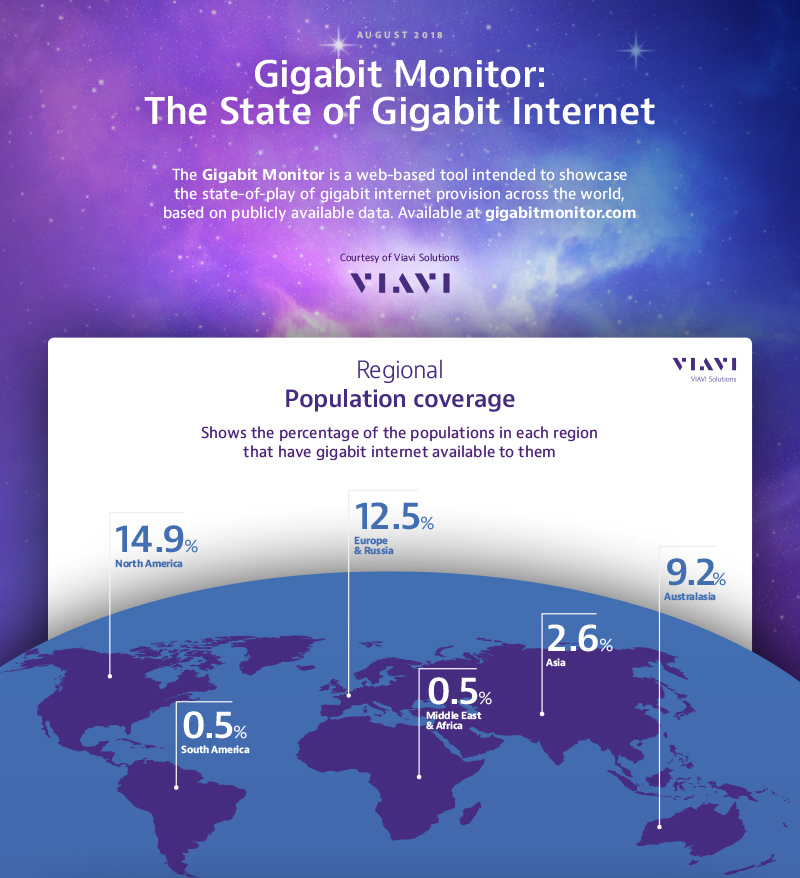 Notably, the number of people with access to gigabit LTE has surged to 74 million, based on large-scale deployments across a number of countries, including the United States, South Korea and China, over the past few quarters. These deployments have turned gigabit LTE into the second most widely available form of gigabit internet, after fiber. Globally, fiber has increased its global share of gigabit deployments to 90.4 percent, however this includes a large volume of micro scale deployments, predominantly in the United States, where populations as small as 300 people are being served with gigabit internet.

Interestingly, the number of hybrid fiber coaxial (HFC) deployments each quarter is also now tracking closely with fiber rollouts, whereas fiber deployments outpaced HFC up until 2016.

The United States remains the country with gigabit internet available to the largest number of people, with gigabit access now available to over 64 million people. Following the U.S. are South Korea with access for 46.9 million, Spain with 30.1 million, China with 20.7 million and Canada with 15.7 million. However, in terms of the percentage of population coverage, Singapore has the greatest gigabit coverage, with gigabit internet available to 95 percent of its population. Singapore is followed by South Korea with 93 percent, Moldova with 90 percent, Qatar with 78 percent and Spain and Portugal tying at 65 percent.

Since the beginning of 2017, gigabit internet has been introduced in nine countries for the first time. The new gigabit countries are Australia, Croatia, Estonia, Germany, Kazakhstan, Malta, Monaco, Oman and Russia.

“It is fascinating to see how public and private companies, and even governments are pushing for gigabit internet to become an economic enabler for their customers, citizens or their own businesses,” said Sameh Yamany, Chief Technology Officer, VIAVI Solutions. “During the last 12 months, gigabit internet deployments have increased by 38 percent, demonstrating that the global pace of deployment is progressing strongly.”

“Beyond the top-line figures, the major story that we are seeing is how the shape of gigabit internet provision is changing,” Yamany continued. “For the first time, gigabit LTE has now become a significant force in gigabit provision, as 74 million people around the globe have access to it. But whether it is fiber, HFC, LTE or 5G in the near future, the onus is on service providers to ensure that the hoped-for speeds and experience match consumer expectations, which requires a robust discipline of network monitoring, testing and troubleshooting.”

The Gigabit Monitor is a web-based tool intended to showcase the state-of-play of gigabit internet provision across the world, based on publicly available data. This living database is updated regularly, based on deployment announcements and feedback from users. The site was launched in 2016 and tracks gigabit deployments since 2004. The Gigabit Monitor displays dynamically updated infographics showing the current state of gigabit internet provision in all 49 countries where it is available. Each country's gigabit internet profile displays the estimated population coverage, global ranking, gigabit launches over time and a listing of local gigabit providers.