400G Technology is a critical tool for service providers and data center operators to meet the network capacity needs of a data-hungry world. VIAVI provides advanced test products for the lab and field to help the 400G ecosystem address this critical challenge.

With unmatched optical transport testing knowledge and experience, VIAVI has leveraged a unique position in the industry to collaborate and strategize with top designers and committees throughout the 400G lifecycle. An unwavering dedication to innovation and interoperability has yielded a suite of advanced optical transport test solutions designed to optimize 400G performance from the lab to the field.

400G is an important standard for high-capacity Ethernet client interfaces. Originally known as IEEE 802.3bs, 400G was officially approved in December of 2017 and is part of a broader family of related technologies including 200G, next generation 100G, and 50G Ethernet.
400G has driven the rapid development and adoption of new pluggable optical modules and switches. Sometimes referred to as 400GE or 400G Ethernet, the standard includes Forward Error Correction (FEC) to improve data reliability. Adoption of 400G network elements continues to accelerate as network operators and service providers reap the benefits of improved bandwidth and efficiency.

The term “exponential improvement” is a bit over used, but in the case of 400G, it is entirely applicable.

Before 100G Ethernet, testing client optics was a much simpler task. Bit error rate (BER) could be quantified for each channel, with “zero” errors over a pre-defined time period often used as the pass/fail criteria. With non-return to zero (NRZ) giving way to PAM-4 modulation and FEC, 400G testing and validation have become much more complex. The sheer bandwidth increase alone has raised the bar for testing significantly.

Challenges
Higher speeds and the utilization of FEC and PAM-4 modulation bring amazing improvements in throughput, but can also lead to some of the inherent challenges of 400G testing. 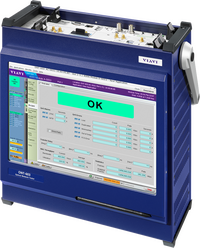 Dense Wavelength Division Multiplexing (DWDM) has significantly increased fiber optic bandwidth. Using this method, a single fiber channel can transmit data at speeds of 400 Gb/sec. or more. With the network only as strong (or as fast) as its weakest link, 400G Ethernet bridges the bandwidth gap between the core routers and the DWDM equipment.

A 400G Ethernet interface allows the full capacity of network elements to be met at the correct density, allowing for seamless and unbridled throughput. Modern switch application-specific standard parts (ASSPs) such as the Broadcom Tomahawk family, can switch over 12 Terabits of traffic in one IC. 400G interfaces align this enormous bandwidth capability with front panel bandwidth density.

ITU-T has utilized key concepts from IEEE 802.3 and the Optical Internetworking Forum (OIF) to determine how the same pluggable modules can be used for OTN interfaces. This is commonly referred to as Flexible ONT or “FlexO”, a mechanism to provides an OTN structure for 400GE and above, as well as FlexEthernet traffic.

Who Should Care About 400G?

The efficiencies gained through 400G implementation ripple throughout the high-speed networking ecosystem. This includes chip and module manufacturers, test equipment and service companies, internet mega-corporations, and telecom providers who rely upon these improvements to keep pace with the insatiable demand.

Along with making good business sense, compatibility between 100G and 400G modules also simplifies testing and upgrades. The first 100G Ethernet solutions were introduced in 2010, with a slow ramp-up continuing through 2016. In the years since, 400G adoption has progressed on a multi-year trajectory as components and solutions become commercially available.

The monumental speed improvement of 400G represents a giant leap forward in Ethernet performance. However, increased speed and bandwidth are only part of the equation. 400G not only delivers more bandwidth, it provides the right bandwidth at the right density. Overall improvements in reliability, scalability, and power efficiency have made 400G a viable technology for our rapidly evolving network ecosystem.

The demands on cloud computing and telecom providers continue to push data center servers to the brink of their physical limits. Eliminating the bottleneck that Ethernet once presented impacts the entire networking landscape in immeasurable ways. Innovations like PAM4 have made this enhancement possible, while introducing a new set of obstacles for 400G testing and validation practices. Continuing to meet these challenges means leading the charge towards a new era of network performance.

Contact a Sales Expert
Request a Quote
Request a Demo