Learn all about bidirectional OTDR testing. Learn how it works, its benefits & drawbacks, and various testing methods and tools you can use!

What is Bidirectional OTDR Testing?

An inherent benefit of OTDR testing is that it requires access to only one end of the fiber optic cable to perform. Because the distance and attenuation measurements are based on optical light backscattering and Fresnel reflection principles, scattered and reflected light photons can be analyzed at the same location where the test signal originated.

How a Bidirectional Test Works

In addition to the OTDR equipment and fiber optic cable under test, a basic OTDR test configuration also includes a launch cable and a receive cable. The launch cable connects the OTDR test port to the fiber run under test and is referred to as a “pulse suppressor”, since it serves to stabilize the initial light pulse from the OTDR before it enters the tested cable. The receive cable connects at the far end of the run and provides a mated fiber connection/junction, with an appropriate run-out segment, allowing the losses of the terminating connector to be assessed.

The existence of these launch and receive cables creates a symmetrical configuration at both ends of the run. In bidirectional OTDR testing, the same fiber characteristics are measured again, using the same (or an additional) OTDR at the opposite end of the run and averaging or combining the results with those obtained in the initial direction.

Bidirectional fiber testing can often produce more accurate results than unidirectional testing, based on the test methodology itself. Since Rayleigh backscattering is used to quantify attenuation and signal loss events, the backscatter coefficient of the fiber must be known and programmed into the OTDR. These coefficients may vary from fiber to fiber, or even within a single fiber. The resulting effect can be misinterpreted as excess signal attenuation or even negative attenuation (gain) at junctions between sections in a fiber run. This variation can be compensated for by averaging the results for end to end loss and individual loss at each connection or splice, using a bidirectional OTDR test.

If the transition at a fiber junction results in a fiber with a lower backscatter coefficient transitioning to a fiber with higher coefficient, the result could be a masking of the actual loss at the interface or splice. This masking or distorting effect is also known as a gainer since the amount of observed backscattering will be higher after the loss event than before it. Conversely, if the transition is from a higher backscatter coefficient segment to a lower one, the resulting signature might incorrectly show a higher loss event at this same location. Averaging the values obtained from opposite sides can provide a more accurate quantification of loss.

Another benefit of bidirectional optical fiber testing is the mitigation of dead zones, where the initial Fresnel reflection from an event, such as a splice or connector, has temporarily blinded the OTDR detector rendering it unable to see reflections and backscatter from additional events directly behind the splice or connector. Since the effect of dead zones tend to occur more frequently closer to the OTDR measuring again from the opposite direction will allow an accurate assessment for the portion of cable that was included/masked in a dead zone during the first measurement.

Long-haul fiber optic cable runs, such as terrestrial networks between cities and countries, require powerful OTDRs with a higher dynamic range in order to accurately assess the fiber span unidirectionally. Using bidirectional fiber testing such as bidirectional OTDR is an excellent way to improve the test integrity over these very long distances.

By combining OTDR measurements obtained from each end, the impact of test pulse degradation at the farthest points from each OTDR can be minimized. Rather than averaging the results, another analysis method used for long-haul applications involves utilizing the OTDR acquisition from each end of a cable run for those sections closer to each end, then creating a composite OTDR trace, where the two acquisitions effectively meet in the middle of the link.

Despite the advantages in accuracy and range to be garnered through bidirectional OTDR testing, the additional complexity that can accompany this method needs to be considered. In a basic bidirectional test configuration using a single OTDR device, the OTDR must be transported from one end of the fiber run to the other to complete the testing.

Even when duplicate OTDRs are utilized, bidirectional testing can add additional set-up time, transportation costs and analysis to the OTDR test process.

Bidirectional OTDR testing may improve the quality and accuracy of measurement data overall, but it is important to recognize that bidirectional fiber testing will not compensate for setup issues such as unclean connections, incorrect test parameters 0r excessive noise in the OTDR trace. Since bidirectional OTDR requires a duplication of tests, there are more opportunities for errors and inconsistencies.

As the advantages and challenges involved in bidirectional OTDR have emerged over the years, creative solutions, in the form of new and innovative test methods, have been developed. Benefits in accuracy and range may be seen from many of these methods, along with improved efficiency and consistency.

The method referred to as “traditional” or conventional bidirectional OTDR testing is the simplest and requires the least amount of equipment. Two independent measurements are performed using the same OTDR. The first measurement is performed by connecting the OTDR to the launch cable while the receive cable is in place at the opposite end, but not connected to a test device.

Leaving all cables in their original positions, the OTDR is then disconnected from the cable under test and moved to the opposite end. By connecting to the receive cable, the same measurement can then be repeated in the opposite direction. It is important for all optical fiber segments in the tested configuration to remain in the same order during both tests, so that the averaging of loss data obtained from the two tests will be relevant.

The time, complexity and analysis required for conventional bidirectional OTDR can be significantly reduced using automated bidirectional OTDR test methods. By employing a master OTDR test device in tandem with a remote device connected at the opposite end of the fiber run, communication between the two OTDRs will ensure identical test setup configurations, fiber connection continuity, and ease of data acquisition and compilation. The convenience of an automated test can improve test speed while greatly reducing error rates. If an all-in-one test solution is used, the same automation features can also be used to perform OTDR testing at multiple wavelengths (to improve fiber bend detection) and include bidirectional insertion loss and optical return loss testing.

Additional bidirectional OTDR methods have been developed over time to improve efficiency or potentially reduce the amount of test equipment needed. One such method is known as “loop back” testing. Rather than situating a second OTDR at the far end of the fiber run, a loopback cable connects one fiber to a second fiber which also requires testing. In this way, an OTDR test pulse can be sent down one fiber and continues through the loop back and down the second fiber too, thus testing both fibers uni-directionally at the same time. To gain the benefit of bidirectional OTDR testing, both fibers (including the loop back) are then tested in the opposite direction from the same location. This method can use a traditional OTDR approach such as in case 1) where a single OTDR is moved from the first to the second fiber to manually test in each direction and the results are manually combined or an automated OTDR approach such as in 2) where two OTDRs are used, one connected to each fiber to automatically test each direction and combine test results.

There are currently a wide variety of bidirectional OTDR test tools available to facilitate efficient and versatile fiber testing. OTDR and multi-use test devices can be easily configured for automated bidirectional OTDR and other bidirectional fiber testing at the push of a button. Test instruments positioned at either end of the fiber run can communicate and share data nearly instantaneously via Ethernet, WiFi or mobile hotspots. These devices also include on-board report generation for convenience and speed.

With the advent of OTDR, our ability to see inside thousands of miles of microscopic fiber has catapulted fiber optic communications technology to unprecedented heights. Bidirectional OTDR once represented a calculated trade-off between data integrity and convenience. New and improved bidirectional OTDR testing methods and devices have changed the conversation, providing additional capabilities and time-saving features that make precision fiber characterization the new industry standard.

Are you ready to take the next step with one of our OTDR test products or solutions?
Complete one of the following forms to get going:

Learn what the #1 cause for fiber optic network failures is and how you can prevent it.

Learn about fiber testing including testing for optical loss and optical speed as well as best practices and procedures.

What does an OTDR measure? How should you configure your OTDR settings? Find out now! 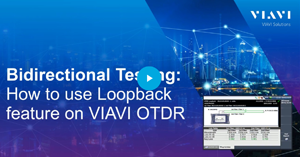 Bidirectional Testing: How to Use Loopback Feature on VIAVI OTDR

Bidirectional Testing: How to Use Loopback Feature on VIAVI OTDR