The PCI Express 4.0 specification was finalized in October of 2017 with a published transfer (bit) rate of 16 GT/sec which is double the bit rate of the previous version, PCIe 3.0. Deigned to address applications requiring higher bandwidth at a lower cost, PCIe 4.0 remains fully backwards compatible with previous PCIe generations.

The convention of bandwidth doubling for each full PCIe release was established with versions 2.0 and 3.0, released in 2007 and 2010 respectively. Incremental improvements for PCIe 3.0 included an encoding scheme that was updated from 8b/10b to 128b/130b. With each successive iteration, PCIe has remained backwards compatible with previous versions, although the lowest version and speed between the PCIe slot and connecting card will always dictate the actual bandwidth performance.

Breaking from the 4 year per release cadence that had preceded it, the PCIe 4.0 final release specification extended a full seven years after PCIe 3.0. Maintaining the established PCIe standard for bandwidth doubling with a backwards-compatible mechanical and electrical form factor had proven a more daunting task for developers.

While meeting this challenging performance expectation, PCIE Gen4 also introduced functional enhancements including reduced system latency, scalability for added lanes of bandwidth and lane margining features to evaluate the electrical integrity and reliability for each lane of the PCIe channel.

With a myriad of additional improvements included, the significant upswing in PCIe Gen4 speed remains the centerpiece around which numerous benefits and avenues for new applications have been realized. The incremental speed improvement with each successive release has now brought PCIe x4 (four lanes) to a level exceeding the first-generation throughput of PCIe x16 (sixteen lanes).

To provide some real-world context, the transfer rate for PCIe 4.0 is indicative of a voltage switch over a differential pair occurring sixteen million times each second.

This speed-doubling tradition of PCIe has enabled PCIe 4.0 cost savings for high-end applications such as cloud servers and data centers while improving performance and real estate efficiencies for standalone devices such as laptops and tablets.

The architecture of PCIe 4.0 is intended to provide improved speed, as well as more economical lane assignment. Any decrease in I/O pin usage enabled by PCIe Gen4 equates to a proportional improvement in power consumption. For example, a GPU has traditionally utilized 16 lanes, while an NVMe drive would consume an additional 4 lanes. This PCIe x4 vs x16 requirement can quickly deplete the available 20-24 PCIe lanes included on a standard motherboard. 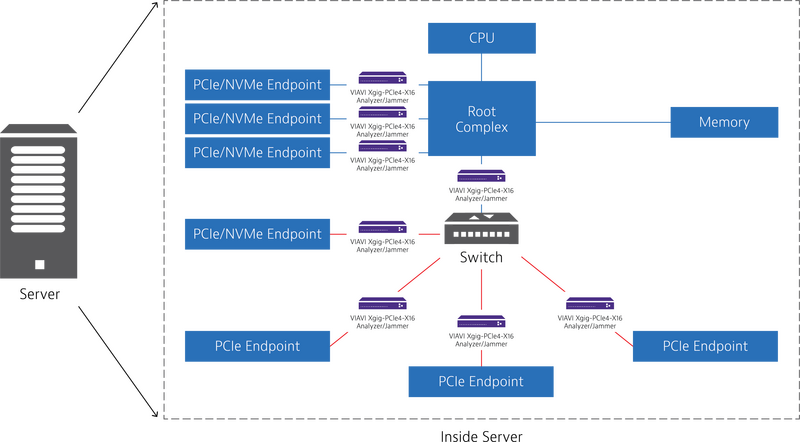 The PCI Express Gen4 architecture also includes several additional features intended to improve efficiencies and power consumption. Extended tags and credits for service devices are features that can mask latency and optimize bandwidth saturation. Superior Reliability, Availability and Serviceability (RAS) capabilities to augment system errors and improved I/O virtualization are among the other new elements of PCIe 4.0. By utilizing I/O virtualization, virtual devices can be substituted for their physical equivalent, such as a network interface card (NIC).

The challenges inherent to PCIe 4.0 design enhancements have also extended into the realm of testing. With yet another doubling of speed, a higher standard has ensued for data capture, analysis, storage and visualization. The higher frequency and channel loss inherent to PCIe Gen4 are additional considerations for new test applications. Reference clock testing has become more complex, with phase jitter requirement testing of all four PCIe iterations and data rates now requisite.

Some of the common hardware issues observed during PCIe testing include link speed issues, traffic issues, and link quality issues after recovery. A protocol analyzer is a versatile PCI Express tester and a powerful tool for testing and debugging many PCIe issues. With the enhanced speed of PCI Express 4.0, the capability to filter out specific packets and record long sequences are increasingly valuable test device features.

Throughout the history of the PCIe standard, test tools have evolved and adapted to meet the demands for speed multiplication and additional complexity within the architecture. In order to ensure accurate and comprehensive testing, multiple tools and processes should be utilized.

Protocol Analyzers
Analyzers designed specifically for PCI Express 4.0, with a high level of visibility into traffic flows and advanced trace analysis capabilities, have become indispensable. Test platforms such as the Xgig 4K16 Protocol Analyzer/Jammer also provide the benefits of error injection capabilities and the means to analyze and jam on a single chassis simultaneously. Memory segmentation enables the capture multiple traces. 64GB of memory in both the upstream and downstream direction also provide ample storage capacity for traffic data capture.

Jammers
Although jamming capability can be an integrated feature of a protocol analyzer, discrete products such as the Xgig Jammer can simulate errors by manipulating live traffic, thereby verifying the responsiveness and robustness of the error recovery process. The timing and types of errors introduced can be precisely preplanned so that automated test routines can be developed. 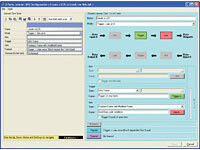 The PCIe 5.0 specification currently stands at version 0.9, with specification level 1.0 indicating final release. This means the next iteration is very nearly complete. According to PCI-SIG, the group responsible for PCIe releases, many PCIe Gen5 devices are already in development and should be on the market later in 2019. Electrical design adjustments are expected to reign in many of the signal integrity issues observed with PCIe Gen4. Customarily, PCIe 5.0 also promises full backwards compatibility and a transfer rate double that of PCI Express 4.0, or a phenomenal 32.0 GT/sec.

The wait for PCIe 4.0 may have been an unusually long one, but the giant leap forward has justified this prolonged gestation period. With PCIe 5.0 following closely behind, the demands on design and test professionals will continue unabated. Fortunately, the new generation of protocol analyzers and other versatile tools have proven worthy of the challenge, boding well for the next generation.

Are you ready to take the next step with one of our PCIe 4.0 test tools?
Complete one of the following forms to get started: